This year, Byju’s, an ed-tech company based in India, announced it has acquired Palo Alto, CA-based learning-through-play firm Osmo for $120 million (854 Cr in INR). The acquisition marked another milestone for an Indian startup gone global. Now, how this move made any business sense for Byju’s has already been thought over a lot, the bigger discussion is what it really means for Indian Education System? Can this acquisition be seen as the proof of the change that has been demanded by the forward-thinking educationists in India? In other words, what does this mean for the future of “rote-learning”?

Osmo is an award-winning game system (available on rent @Rentoys) with which the physical space in front of an iPad is turned into a playground for kids. Kids can learn maths, words, play puzzles, draw anything, and even learn to code. Osmo has been adopted in over 30,000 schools in 42 countries around the world. Teachers are raving about how their students love experimenting, exploring, creating and collaborating with Osmo. Here’s a small video on how it works:

Bjyu bet on Osmo to capture kids segment of 5-12 Yrs old is significant for 2 reasons:

The fading image of “chalk and talk”

Play-based learning ensures that early literacy skills of pre-writing, drawing and mathematical concepts of classifying and charting are explored through play in ways that are authentic to the child. A study found that “in addition to improving play skills and narrative language ability,” a play-based curriculum also had “a positive influence on the acquisition of grammar.” Neuroscientists have found that play activates the brain in meaningful ways that rote memorization, testing, worksheets, and traditional classroom techniques do not.

According to Lauren Harness, who earned her MEd in Curriculum & Instruction: Early Childhood Education from Concordia University-Portland, “When people say ‘play-based learning,’ I think what they go to is: ‘Just put them in a room with a bunch of toys and let them go at it. There you go, that’s play-based learning.’ But really purposeful play should be in classrooms, especially in a kindergarten classroom. In children’s brains, when they’re playing, they’re doing the deepest learning. We know that through Piaget, Vygotsky, and all those good theorists who talk about the importance of play with young children. The different levels of learning that they’re able to get into during play is a lot deeper than pulling out a worksheet and having them fill in bubbles and that sort of thing.”

Play-based learning is here to stay

Byju’s existing product is fulfilling what is (almost) every Indian parent’s dream – preparing kids for the engineering and medical entrance exams. With Byju’s endorsing Osmo as a tool for delivering primary education in a different way via schools, the demand for play-based learning is going to take over that of “rote-learning”. We will see more and more schools adopting new methods to meet the rising demand from parents. This may be a far-fetched reality or a wish that is too good to be true, but the signs look good.

Free Play is the key to an effective early learning

Is your toddler’s school teaching A for Apple or A for Future?

Do you know we don't charge for toy breakage or late returns!

Or, receive an instant callback by submitting the form below 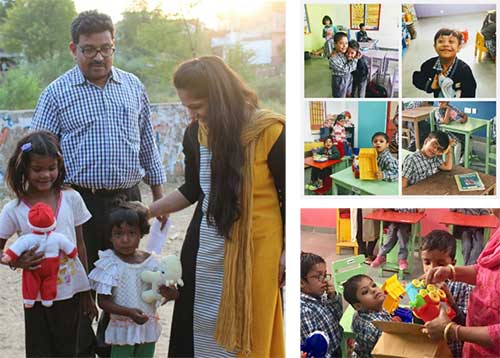 For every new subscription we donate one toy to an underprivileged kid. You can also contribute to our cause. We offer pickup from anywhere in India for all donations.

Your new and gently used toys/books/clothes donations mean a less fortunate child has a reason to cheer up.
Donate Now